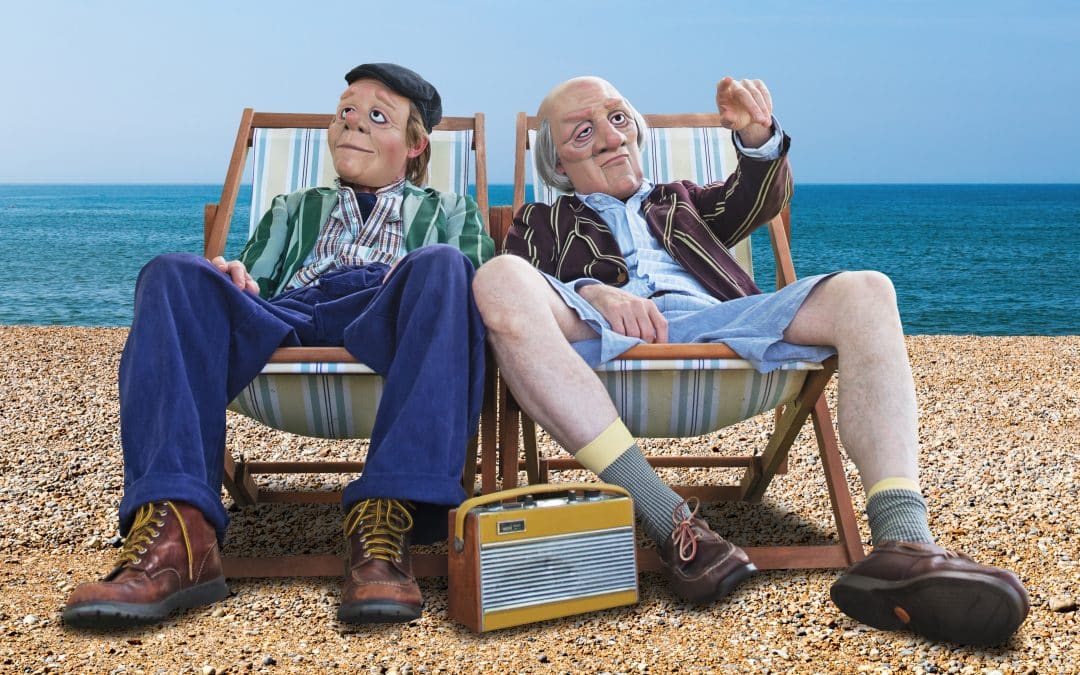 The tour will include 23 venues, travelling as far north as Inverness, south to Canterbury and across the UK from Norwich to Taunton, taking in venues large and small.

Funny and poignant in equal measure, Dead Good brings together some of the UK’s leading mask actors to tell the story of Bob and Bernard, who have only two things in common – they’re both dying, and they’re not going down without a fight. So, with a bottle of Bollinger and the keys to Bernard’s Bentley in hand, they decide to hit the road, and take on one final, death-defying adventure.

But when time really does start to run out, can Bob and Bernard accept the inevitable? Can their growing friendship make the difference? And by seeing the end in sight, can they truly value living?

The production, which has no spoken word, features an original music score, film projection, a multifaceted set design, and characterful new masks especially made for the show by Russell Dean of Strangeface.

The cast for Dead Good includes international clown performer, Aron De Casmaker, from Canada. Based in the UK he is best known for his work as principal clown in Cirque du Soleil’s Alegria and Slava’s Snow Show; Winchester born James Greaves is one of the UK’s most experienced mask actors and a veteran of full mask pioneers, Trestle Theatre; London-born Angela Laverick and Gloucester-born Joshua Patel have both worked previously with Vamos Theatre, including tours of two acclaimed productions, The Best Thing and A Brave Face.

Vamos Theatre has gained a strong reputation over its thirteen-year history for its ground-breaking and thought-provoking work, and its willingness to tackle ‘difficult’ issues. Dead Good is no exception, asking questions about end of life, living well and dying well. The show is an exploration of death but, most importantly, a celebration of life – and an opportunity to get people talking and thinking about the ultimate shared experience.

Audiences who want to ask questions, or who would like practical or emotional advice and support after the show, will be able to chat with charities at most venues, including Marie Curie and End of Life Doulas via Living Well, Dying Well.

Artistic Director, Rachael Savage, has been at the forefront of the research and writing of the show, which has seen her meeting palliative care patients and health professionals who work in end of life care.

Rachael comments, “The phrase “Nothing about us without us” has become part of our core beliefs. I could not have written this show without the input of so many generous and wise people, and in particular, the support of two brilliant men, Dave and Nick, both terminally ill, who have shared their most intimate and precious feelings and experiences. I’m stunned every time I talk, text or email them about their zest for life and love, their appreciation for the minutiae and their shocking sense of humour. Writing Dead Good has deepened my value of life, made me think about planning for a good death and I’ve laughed ten times more than cried. Expect another Vamos Theatre rollercoaster and for your preconceptions to be smashed.”

Maggie Keeble, GP and Chair of the Worcestershire Palliative and End of Life Care Network, comments, “I am so pleased that Vamos Theatre has embraced the issues relating to death and dying in such a positive way. All too often as a GP I see the negative impact on people and their families of not talking about death and not accepting that life is coming to an end. As a death denying society we need the arts including theatre and literature to give people insight into the many benefits of accepting the inevitable and celebrating and enjoying every moment of the life left to live.”

As with all Vamos Theatre productions, the tour will include Relaxed Performances, which are for anyone who may be put off going to the theatre because they need a more flexible and easy-going theatre environment. Being wordless and visual, Dead Good is also accessible to deaf and hard of hearing audiences without a signer.

The company, which is well-known for its accessible and supportive learning and participation, is also offering workshops for schools, which give young people a taster of mask, physical theatre and devising. There will also be special talent-development Masterclasses throughout the tour, which offer actors, practitioners and teachers a thorough introduction to full mask technique – venues for these include Jacksons Lane. London (1st Feb); The Studio, Festival Theatre, Edinburgh (15th Feb), and Cornerstone, Didcot (14th March). The company often find new performers through these Masterclasses so they are expected to book up quickly.

Dead Good is a co-production with Corn Exchange Newbury and a co-commission with London International Mime Festival, made with support from The Leche Trust and Worcestershire County Council. It is suitable for audiences 12 years and upwards.

For full tour details and to book tickets visit: